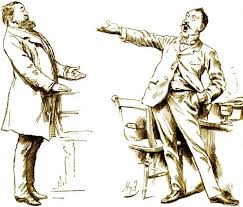 First a story by way of analogy. When I was in Brazil as a young LDS missionary I once had a conversation with a native Brazilian that went something like this:

Me: Hello, I’m an American.

Brazilian: I’m an American too.

Me: Huh? Aren’t you from Brazil? Of course you aren’t an American!

Brazilian: Yes, I’m from Brazil, so by definition that makes me an American.

We realized that we were talking past each other because we both were employing different definitions of the word “American” but we both assumed that the other shared our definition. I was defining “American” as someone from the United States. He was defining “American” as anyone from the North or South American continents. Once we cleared up that confusion we realized that we didn’t really have a disagreement, we just used the same word in two different ways.

Mormon Definition (MD): A Christian is one who strives to follow the historical person Jesus Christ.[1]

Evangelical Definition (ED): A Christian is one who (a) believes the essential biblical doctrines required for salvation and (b) is saved. [2]

I’ve actually met Evangelicals who sincerely don’t consider the Pope, the leader of the Roman Catholic Church, to be a Christian. This is understandable considering the narrow definition that they are employing (ED). So, when an Evangelical confronts a Mormon and tells him that they are not Christian, the Evangelical has ED in mind, whereas the Mormon has MD in mind. Feelings are hurt and the message is lost. As a Mormon, if an Evangelical approaches me and says, “You are not a Christian” this is a very strange and odd thing to me, because from my perspective, with MD in mind, there is no question but that I am a Christian. But if an Evangelical approaches me and says “According to the essential doctrines taught in the Bible, you are not saved”, that is a totally different statement to me. In each case, from the Evangelical point of view, the same thing was said. But in each case the Mormon understood it very differently.

In common Evangelical parlance, the word “Christian” = “saved”. They are synonyms. In this view, there is no such thing as a Christian who is not saved. But not so in LDS vocabulary. There are many, many, many Christians who are not “saved”.

In summary, I think this entire issue can take a huge leap forward if we would all just take the time to carefully define what we mean by Christian. Then we can have a conversation about whose definition is better, if such a debate is even worth having.

This is the first of a series of posts I plan to do on this topic. The next post will critique the common Evangelical definition of “Christian”.

[1] The LDS Newsroom makes the same argument I’m making here, and they define “Christian” in the way I’ve outlined above: http://beta-newsroom.lds.org/blog/are-mormons-christian-

[2] For an example of this, see here: http://carm.org/christianity/christian-doctrine/christian