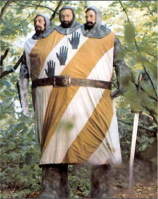 Analogies for the Trinity often fall short. At some level, of course, all analogies fall short. Recently I heard the Trinity derogatorily referred to as a “three-headed monster”. My first reaction was that this was uncalled for and offensive, but upon further reflection I wondered if, behind the insult, there was some kernel of truth.

In “Monty Python and the Holy Grail” one of the knights of Camelot stumbles upon a three-headed knight. All sorts of ontological questions could be asked about this entity. Is it three persons or one person? Is it one ousia or three different ousia?

It seems to me that we could describe this three-headed knight as being three persons. They have three separate centers of consciousness and (unlike the Trinity) have different wills (they get into a disagreement amongst themselves while “brave” Sir Robin escapes).

But do they share the same ousia? I may not be qualified to say, but I tend to think that they do. Wikipedia (for what it’s worth) describes the Eastern Orthodox view of ousia to mean “all that subsist by itself and which has not its being in another.” The three persons appear to not subsist on their own, and it could be argued that since they are one organic entity they have their being in each other. It is doubtful that two of them would continue living if one of them died.

It may be just another imperfect analogy to the Trinity, but perhaps it will be useful in helping non-Trinitarians (and millions of Trinitarians who don’t understand their own doctrine) what the Trinity is.

Comments from Trinitarians are welcome.

5 comments on “Monty Python and the Trinity”